Twitch
the Plague Rat
WITH
VERSUS

A Zaunite plague rat by birth, but a connoisseur of filth by passion, Twitch is not afraid to get his paws dirty. Aiming a chem-powered crossbow at the gilded heart of Piltover, he has vowed to show those in the city above just how filthy they really are. Always a sneaky sneak, when he's not rooting around in the Sump, he's digging deep into other people's garbage for discarded treasures… and perhaps a moldy sandwich.

Hello again everyone, what's up? It has been a while since I wrote on here for the last time, lots of stuff to do, but anyways, happily, we're back with one more guide!

So, Twitch has been one of the tricks I had up my sleeve on jungle for quite a while now. As the Season 7 is now over, though, I tried to gather up as much information as I could for you guys, so you'll be able to master the Twitch Jungle for the next season!

So, Twitch is a late-game hyper carry, why would you ever pick such a fragile champion on jungle?

The answer is simple, compared to another AD Carries and even Junglers, Twitch has an insane gank potential due to his 'Q'

Further, you Twitch outscales countless other junglers in late game. It all comes down if you know what you're doing, you will utterly destroy the game and as we go through this guide, you will see how.


This is the build you should be going for on almost every game, the idea here is that you want to get a massive amount of attack speed on the early game, that is why you go for Bloodrazor[/quote] and

is another 'must-go' item for Twitch, huge amount damage, basically doubles you crit, increases your Crit chance... So yeah, you certainly do not want to miss all these stats.

Berserker Boots for the lolz, but sometimes it is just not very effective. You can then choose either

Mercury Threads, so keep that in mind.

The rest of the build is entirely your choice, just try to understand what you need

However, I separated some items you can usually go for as Twitch

These are one of the items I'd go for depending on the current state of the game, so definitely try them out, here's a breakdown:

Duskblade of Draktharr when there isn't too much tankies on the enemy team AND I am strong enough for that, otherwise, I'd choose something else.

Mortal Reminder is a trustworthy option if you're looking for penetration and, obviously, mitigating heal effects. I actually do like this item better than Lord Dominik's Regards.

Maw of Malmortimus on the other hand, is genuinely a good offensive-defensive item, not only it gives you more damage and cooldown reduction, but also gives you a whole lot of survivability!

Another offensive item for when you're winning, although I don't think it is really necessary for Twitch as you get so much attack speed from Legend: Alacrity

Now, for the runes section, I'll try to briefly explain why I and many other players usually pick

Press The Attack over

Obviously, the removal of Fervor was a huge deal for Twitch and Twtich players surely miss it, but Press The Attack's damage does not feel that bad in the early stages of the game. It does fall behind later, but in my opinion, still better than Lethal Tempo.

Subsequently, I'll quickly go over the other runes on the three. Not going to compare them, so this section won't be long

Triumph is a matter of fact one of the best runes and apparently it won't get nerfed anytime soon. Compared to the others on the same set, Triumph seems to be by far the best.

Legend:
Alacrity is a must have, this it what makes your attack speed scales for an insane amount throughout the game.

Coup de Grace is what AD Carries use the most, plus the other ones are not very effective.

Sudden Impact will help you on early ganks as well as in late-game fights. Go for it!

Relentless Hunter helps you set up your ganks in mid-game as well as quickly go through the map in order to pick fights and do objectives along with your team.

Essentially, you will do the same route every game, at least for the early game. Because of that, you will need to protect the entrances for your own jungle in order to avoid a possible invade coming from the other team.


This is the route you should be doing every game: 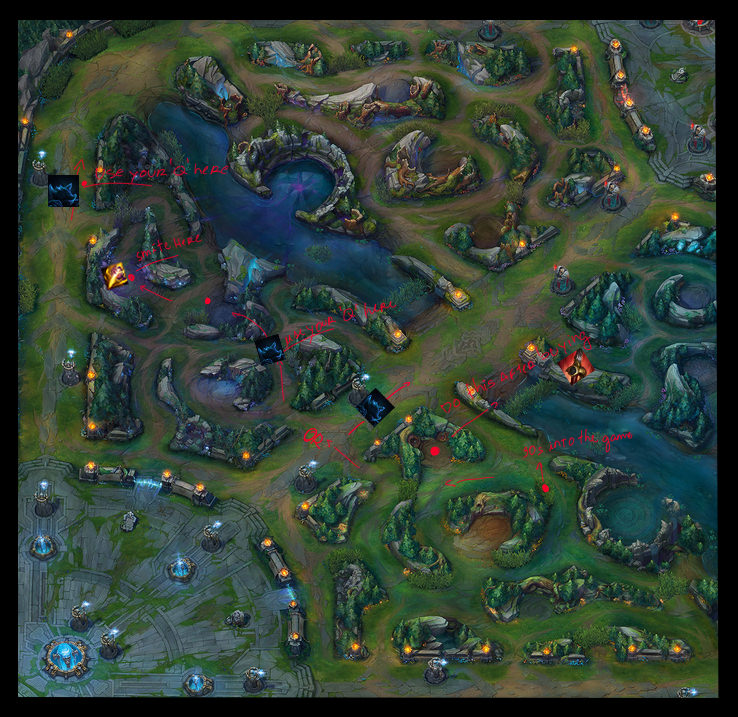 Starting Red Buff allows you to kite the jungle monsters better and, therefore, do your clear faster, not to mention your gank potential.

On this pre-season though, you have to be really careful when playing Twtich Jungle as Riot, yet another time, changed the jungle experience, so make sure to ward your jungle and after the first gank, go back and try to clear as much jungle camps as you can.

Also, when you feel stronger than the other jungler, if your team has pressure around the map, do not hesitate to invade and put the enemy jungler behind

The most fun part and yet the most difficult. The level 2 Cheese mid or Level 3 Cheese top will almost always turn into a kill for your team, but the game isn't won by them, you gotta try to gank lanes with good a set up (a stun, slow or snare) and don't hesitate to sit in a lane for 30 seconds in order to put up a gank, most times you will have to use

Ambush multiple times in a gank, so don't panic if the first time doesn't go through!

Moreover, at least in the early stages of the game, you should NOT try to gank strong assassins like

Zed, unless you know you will burst them before them burst you.

Notice that you never want to fall behind as Twitch Jungle, for the simple reason that if you fall behind most champions will abuse your weaknesses.

Pro-tip: Try to use your W toward the direction that you think the enemy will try to run to, so that you have guaranteed slow and stacks for your E

Mid and late game as Twitch

Usually if you're strong you want to pick fights right? Right! It is no different as Twitch, but you have the advantage of your Ambush to quickly sneak peak into your enemies and assassinate them.

Twitch jungle is overall a very strong pick and if you know how to abuse it at least decently you can farm elo like crazy! Definitely give it a try! :)

Further, I want to give some special tanks to RAT IRL, the guy who I learned Twitch jungle from, he's a challenger Twitch jungle main, if you really want to learn/main Twitch make sure to check out his Twitch/Youtube

Here's a little video about him:

Thank you so much for reading until here!
LOGIN OR REGISTER TO POST COMMENTS
OTHER GUIDES FROM USER