Kassadin
the Void Walker
WITH
VERSUS

Cutting a burning swath through the darkest places of the world, Kassadin knows his days are numbered. Though once a notorious adventurer, he had chosen to live anonymously and raise a family among the nomad tribes of Shurima—until the day his daughter was claimed by the Void. Kassadin vowed to bring her back, combining a number of arcane artifacts and forbidden technologies for the struggle ahead. His precautions were not enough, however, and these devices now only serve to slow the insidious corruption that ravages his body... but he will gladly pay that price, if only he can save her...


The reason for this is that Null Sphere

is a great poke and with Summon Aery

is the best Kassadin ability, it gives you a lot of mana sustain, allows you to farm under the turret easily, so why not max it first or second? The reason is, it's not worth, on the pre 6 you don't get as many opportunities to use your W in enemies, plus you are running Summon Aery and Scorch, thus you benefit much more from throwing your Q and E as you will proc Aery everytime you use those abilities.

gains charges whenever someone uses a spell, and you can use this in your favor against many champions, specially the AD ones; as Null Sphere's magic shield is not that effective versus AD champions, maxing your E instead might be an option. But if you are not against an AD champion you shouldn't max Force Pulse unless you want to shove the lane hard.

the most broken ultimate in the game, it allows you to Teleport to a nearby location nearly every 5seconds. You can use it as a gap closer to use your standard combo -check 'Combos' section-, to out play your enemy or do your full combo and completely annihilate your enemy.

Now we get to talk about the runes!

Above I suggested taking the Sorcery tree

followed by the Precision tree

as secondary choice and I will explain why I think this is one of the best combination of runes for Kassadin so far.

Summon Aery Is probably a must have for Kassadin now, you can proc it really easily due to your point-and-click Q and Aery is overpowered by now, think of it as the old Deathfire Grasp.

Arcane Comet seems OK for him, and maybe it will be more used once Aery gets nerfed.

Phase Rush: Honestly, this rune was promising but many say that it is utter crap, plus I don't think this one is any good on Kassadin. Tell me you experiences

Nullifying orb I am not sure how good this one is since I haven't tried it out yet. I'd say that it is very situational and you'd rarely use it.

Ultimate Hat By far the best out of the three. You spam your ultimate a lot, and having its cooldown reduced even more only makes it better.

Transcendence seems really good overall, allows you to spam your combo more frequently than you normally would.

Celerity:
Why would you ever use this?

Absolute Focus Also an excellent rune if you want your poke-ability to be even stronger, but not as good in a 1v1 fight.

Scorch I am positive that this is the best rune for Kassadin so far, your Null Sphere

gets so much stronger with that, and assuming that you will be running Summon Aery

as a keystone your Q becomes absolutely annoying!

Waterwalking is for junglers I guess, this is not any good for Kass.

Gathering Storm: Many of you may argue that Gathering Storm is good, and I really think it has potential, but if you look at the games in pre-season, we are basically having pretty one-sided games that end before the 30 minutes mark, though is at this same mark that the rune starts getting really good, at 20minutes though, it is nothing more than an Amplifying Tome

Presence Of Mind: Really good rune for Kassadin, I just don't see why you wouldn't pick this one, basically kill them using the 800 mana ultimate and restore it all the way!

Coup de Grace: By far my favorite rune, I personally hate when enemies live with 1HP so I run this one 99% of the time

I definitely encourage you to try out the other ones, tell me if you find anything better. I am just listing what I think is good!

Anyways, let's hop onto the next topic!

Kassadin's bread and butter combo. Try to use this whenever your enemy miss/waste their skills and keep standing on your range.

Basically you use Riftwalk to get closer to your enemy and then rapidly use your combo and leave. Ideally you want your enemy to use one of their abilities so you won't take much damage back but, if you use Rift Walk wisely to out play your enemy as you get closer to them you don't really need to wait out to use this combo.

When you just don't want to put yourself at risk you can just use this; Use your Riftwalk to get closer to your enemies and then rapidly use Null Sphere followed by Force Pulse and leave.

When you want to quickly burst down your enemies you can use this combo. Ideally you want to stack your Riftwalk 2 or 3 times to potencialize your damage, so basically you have to hit your Ultimate followed by the whole combo, this will do a huge amount of damage!

This video showcases many combos that you can use, I hope you can learn a lot from it, there you go!

Now, let us talk a bit about itemization

Great sustaining, you can choose to start 3 potions, but I think Refillable's cost benefit pays off later on the game.

If you can get this on the first back it's actually great; you are going to get a lot more of sustain and survivability off this item.

If you had to back too early and you're not able to get the catalyst you can upgrade your refillable to this one and if there's any gold left you might also buy a Control Ward.

A must have, you get so much sustain from this item, it gives you really nice stats as the game goes on. Basically an item that you should be getting every game.

Great to give you extra armor and survivability on Team Fights.

Excellent complement to your overall damage, but not a must have like Zhonyas or Rod Of Ages.

If more damage is what you need, just buy this bad boy.

You usually buy if you need more explosion damage.

If it's being really hard to deal with their full AD comp this is definitely an option.

Good for going in and out without receiving too much CC.

This is a great option when you're up against an AD in lane, you can buy it early on to have more survivability versus ad champions.

Also an option when dealing with too much CC.

Next up, I will give you some times for playing the stages of the game.


Laning phase is something that many people struggle a lot to learn, there's a lot of different situations that might cause you to lose the lane, but don't you worry, I'll help you with that!

Firstly, Kassadin can trade very well in level 1, but don't go crazy on them. Try to just trade poke for poke, you will normally win due to your magic shield.

When laning versus ranged champions try to hit the melee minions and farm them as fast as you can without taking too much damage and then get back and wait until the lane is shoved towards you.

Be careful not to become cocky in lane pre level 6, this will cost you too much if the enemy decides to punish you. Just calmly poke them with your Q when possible and try to stay safe until level 6.

From level 6 on you can start being a little aggressive, try to wait for your enemy to waste any of their abilities and then go in with you ultimate using either the [color=yellow]Poke Combo[/yellow] or the Safe Poke Combo.


On the Mid Game, I assume you will have your Rod Of Ages, boots and half a Lich Bane ready to go. Here you try to play around your jungler and roam with them. Kassadin is great for small fights so you gotta be constantly looking for them. After winning a fight try to get small objectives like a Dragon, Rift Herald or even a turret.

Also, the mid-game is the perfect opportunity for you to get your Full Combo off on the carries.

In summary, play around your time, try to kill the carries first and always try to get objectives when you successfully win a fight.


Kassadin's late game is indeed very strong, therefore you should always participate on fights and try not to die. From this point on though, you don't wanna put yourself at a big risk, try to play wisely.

Ideally you have to do as much AoE damage as you can when the fight starts with your E and your Ultimate. However, before it starts you can use the Safe Poke Combo to get the enemies to low health.

As well as many other assassins, if possible you should always flank and kill the AD Carry or any other carries if they are an easy pray, but if they're not, just follow the script and play with your team!

I think that is it for this section, and this concludes the whole guide for now, but don't worry I will go over more details such as match ups and macro play in a near future, so expect more updates!

Thank you very much for reading until here, I hope you learned a lot. You are now all set up to start playing Kassadin, practice makes perfection, so practice a lot. I really hope this helped you, and if it did don't forget to give it a rating and leave a comment below.

Once again, thanks for reading and feel free to give me any suggestions to improve this guide.

Lastly, if you enjoyed this guide, feel free to check out my other guides. 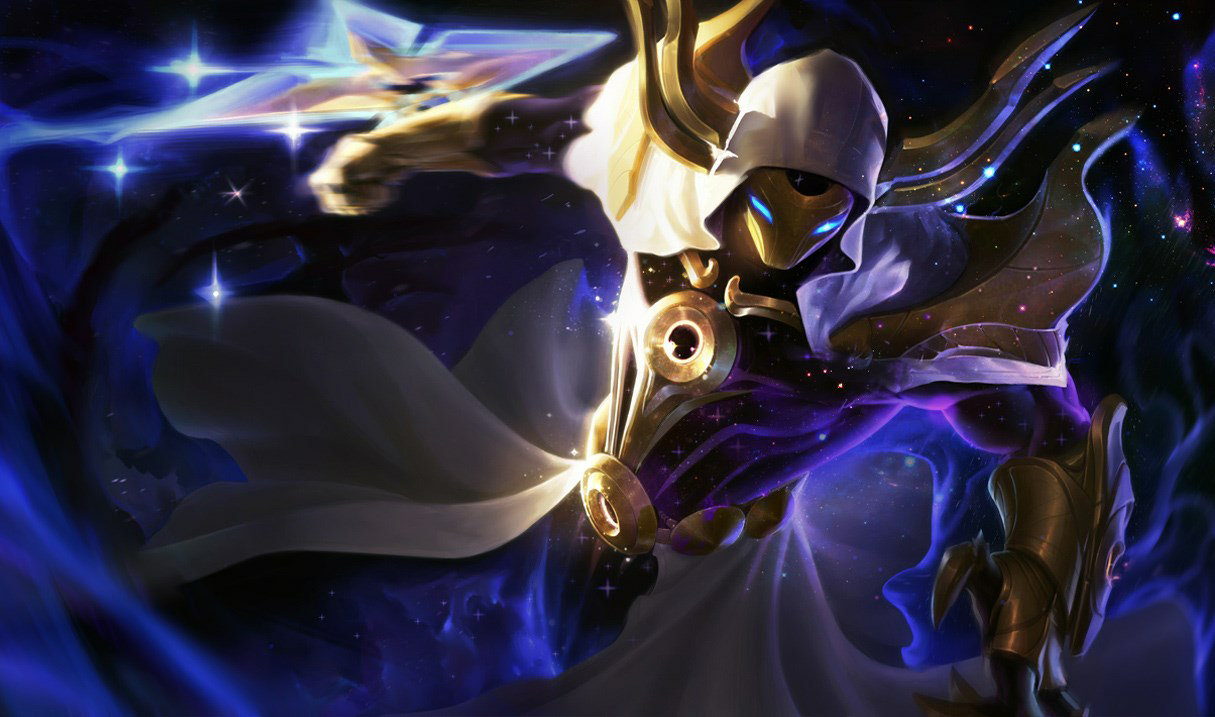