Archeage 3.0 is the largest content update that the game has ever had, in whit article we will shot the most important features


The two new races, Dwarves and Warborn will come out in this update with thier new starting zones, Aubre Cradle (Nuia) for Dwarves and Sunbite Wilds (Harani) for Warborn.

Short of both stature and temper, most Dwarves have little time to waste on niceties. The industry is the watchword of their people, and, as a result, they have managed to become Erenor's technological powerhouse.

Don't mistake the Dwarves for mere idle thinkers, though. Naturally hale and hardy, they favor a hands-on approach to learning, strengthening their bodies and spirits with metalworking, mining, and more.

Dwarven war machines are sought after by people the world over. Their immense power makes them perfect for adventurers and cities alike, while their exceptional craftsmanship makes them favorites for martially-minded collectors. Although willing to wheel and deal with most of their constructs, there are rumors of an even deadlier weapon that they keep secret and hidden.

Once the mindless servants of Orchidna, the Warborn were unleashed upon the world as bloodthirsty beasts. Beneath the rage and fury, however, lurked captured souls, wielded like weapons against their will.

The lives of the Warborn are difficult. The sins of their past weigh heavily on their souls and the threat of their tainted blood overtaking them threatens at every moment. Known as Ravagers, the Warborn who lose control are literal monsters, capable of laying waste to entire groups of soldiers without effort.

In exchange for their unquestioned servitude, the Haranyans gifted the Warborn with magical collars that suppress their dark gift. Still, the siren call of their cursed blood is never completely silent. It is an exceptional power they possess. Should they not use it to change the world?


Tame the power of Orchidna and turn it against Erenor's greatest evils!

Abyssal Power can only be applied to one skill tree at a time, unlocking a specialized resource that allows you to use powerful new skills that will change the way your character plays.

Every skill tree has its own, unique active and passive abilities that can be unlocked with Abyssal Power. Only by mastering these fearsome new skills will the champions of Erenor be able to meet the new challenges that await them.

The first big change regarding the skills is the introduction of Abyssal Skills.

These new end-game abilities provide a path to continue progression once a character has reached maximum level in a skill tree.
In addition to the 120 different possibilities of classes, Abyssal skills will create even more possibilities. Abyssal skills will both be active skills and passives. These will help make your character even more specialized.

You will need to be level 55 in each skill tree before you can start the questline to activate Abyssal Skills. Abyssal Skills also have levels and do not use mana because they consume some own special points that you use while using abyssal skills and will be charged by new passives.

Only one of a character’s three active trees can have the abyssal skillset enabled at a time.


Now all races have their passives reworked and now all of them have a 5-minute buff that can be activated by going to the Skills window and clicking the button for it. This skill has a 30-minute cooldown.


Shrug it Off and Bondbreaker have received significant changes this time around, losing both their 50% damage reduction AND their ability to “pre-cast” before an incoming attack. This means they are now purely reactionary skills, only able to be cast while under the effects of one of the debuffs they remove. Conversion Shield also took a hit, becoming “Spell Shield” and gaining a noticeable downside in the form of reduced Received Healing for the duration. These skills are still useful, of course—but they are no longer the one-button cure-all that they used to be.

Snare gains a lot of importance in Revelation. With moves like Tiger Strike and Behind Enemy Lines no longer able to be used during Snare, Battlerage users will really start to feel that lack of mobility. In addition, Archery users have gained the ability to cast Snare up to 30m away while using Float, and their Snipe combo now works with Snare instead of Sleep.

In another dramatic shift, Archery has received a near-total overhaul. The Deadeye buff now lasts for up to a minute, granting its full Ranged Attack bonus (and free Feral Mark!) whenever you stand still to unleash a volley of arrows. Snare is finally useful, Boneyard works better than ever before, and Concussive Arrow becomes a veritable tank-buster with up to +200% defense penetration on Bleeding targets. All this combines with Archery’s absolutely insane Abyssal skills, which increase the range of all bow attacks to unprecedented levels. Expect big changes in the way you see archers played in this expansion.

Mages and those dabbling in magical arts should make sure to review their skills, as a few new curveballs are being thrown their way. In addition to the previously mentioned Spell Shield change, God’s Whip is losing its combo with frozen targets, enemies in Bubble Trap now receive -50% magic damage (we’re looking at you, Meteor Bubble), and Insulating Lens may be instant cast but it no longer prevents Tripped.

A new battleground in Mistsong Dungeon allows a 12v12 group to battle against each other in a deathmatch.
There will be no rounds, just a time limit.

Players that are killed will be immediately revived and returned to the ongoing battle.
At the end of the match, the player with the most points will win, and ranking in the Battle Arena will be according to most points.


There will also be a Naval PvP area. Ten players can go up against each other to battle each other’s ship.


Make use of new Migration Talismans to shift your base stat points from one statistic to another. Now you can reduce the stats you don’t use in order to increase the ones you need!

Migration Talismans, adds 5 points to a stat of your choice by taking 5 points away from another stat. This item is purchased from General Merchants for 50 gold a piece.

Luminious Migration Talismans, needs to be re-created through the knowledge of combat and the secrets of the Evenbards. Use this item to add 10 points to one stat while taking 10 points from another. Craft this item by grabbing a Boost Scroll from an Evenbard and 10 Honor Badges from the 8 man, Free For All Arena. 3 kills in the arena will net you 1 badge, while 10 kills will net you 5. 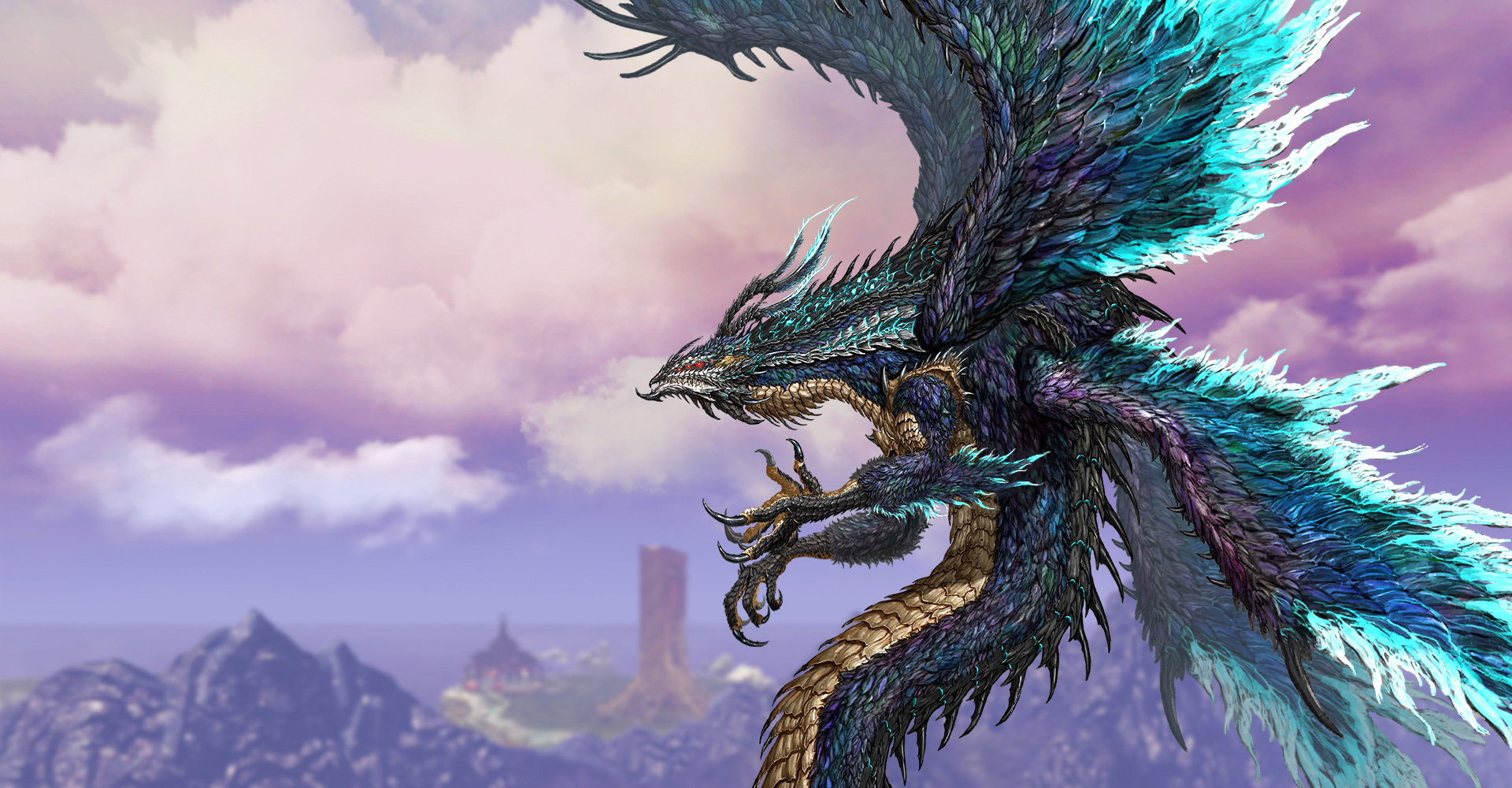 A gargantuan creature has risen above Auroria, colossal body snaking through the sky and wings blocking out the sun. Can the people of Haranya and Nuia put aside their differences and defeat a monster unlike any they have ever faced?

Launch an all-out attack against this monstrous sky serpent, mounting gliders to meet the beast in the air and massing an army to strike from the ground!

This epic confrontation will be made available after Revelation's launch.

In Auroria, there will be a new region, the seventh region, in which this new boss, the Thunderwing Titan is an aerial world boss, meaning you have to fly around on a glider to fight the boss.


Now any weapon graded Celestial or higher will have a glowing effect on it that corresponds to the grade’s color.

These buildings have several beds (that you can sleep in for the price of 2 Gilda Stars). These are not purchasable. These are community residential halls that can be upgraded through completing dailies.


The family system now comes with dailies that provide vocation badges. Families now have levels, just like guilds do! Increasing the family level will give you more buffs.


In addition to the new locations for the races, there will be two new housing regions, in which there will be over 2,500 housing places
This should shake up the real estate market quite a bit.
Also, mansions will now be upgradeable to specialized mansions, much like the current townhouses are.